This theory interprets the guldgubber as votive offerings to higher powers or entities.

The word entity is used on purpose as I do not want to relocate Viking Age gods into the Early Iron Age.

The guldgubber could have been used to express a certain wish to the entity or entities during a wish, prayer, ritual or ceremony. If one wants to identify the wishes, one has to decode the pictorial world of the guldgubber first in order to understand the whole ritual.

What do the individual pictures with their attributes and symbols mean?

An attempt to decode the pictures will be given in an example of a staff-bearing man. 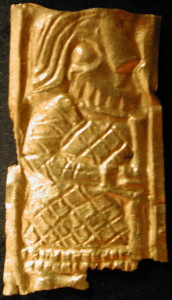 Guldgubber depicting a staff bearer with a beard [A-II-6]

A staff-bearing man could stand for a wise man, as elderly people tend to have a staff and are generally considered to be wiser than younger ones.

But the staff could also indicate a judge or some other person personifying the law. The staff is still used in legal context some hundred years later, and at least in German sayings the staff is still (in 2014!) used as a reference to law and judgment.

The third possibility is that of a wizard, magician, druid, or shaman, seeing the staff as a magic wand.

So a wish made with this gubber could mean a wish for a wise judgement, wise or good guidance or advice, and probably the wish for help (magical or not).

A possible function and symbolic meaning can be found for every category or subcategory of the guldgubber.