The next theory uses medieval German law texts for comparison.

It has been stated by me in an article from 2009 that there is a continuity in pictures from the Vendel Period to the end of the 11th century. After that time the pictures tend to be of Christian painting style.

I have found a medieval law text, the pictorial law text Heidelberger Sachsenspiegel (cpg 164). The advantage of that text is that the law is described in words and pictures, which makes it quite easy to understand and find the right gesture for the law explained.

The guldgubber and the pictures of the law text could be compared directly, and parallels with the imagery of the gubber can be found that way.

The only problem with this text is, that it is from the medieaval times. So there is quite a time gap between the origin of the guldgubber to the mid 13th law text.

Law is something that changes very slowly and a lot of law things were heathen and old, when christianity ruled over Scandinavia. So it might be, that the law gestures displayed in the Sachsenspiegel are based on old rituals and gestures of that time.

Interessting is, that almost every guldgubbe can be placed into a legal context, the majority quite probably in a context of inheritance.

An example of a law context can be given here. The context of inheritance is chosen, as this was and is often a question of debate amongst the heirs and has to be regulated somehow.

The rune stones of the Viking Age state that quite clearly for the following era, and right down to the present day inheritance needs regulation. 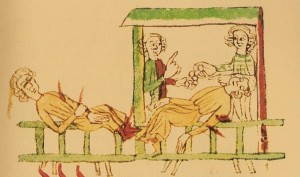 In the picture above the man in front of the house is mortally injured and is being transported into the house in order to heal him. Unfortunately he dies in the house. He is showing two gestures of incapability. The first one because he is injured and cannot move, the other one, with his hands parallel to his body, because he is dead.

If one turns the wraiths of subcategory [D-I] around, it is quite easy to see the stunning similarity. 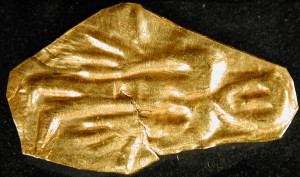 So this guldgubbe could be used to show that someone died and another person claimed his bequest. The law document (one or possibly a collection of guldgubber) could have been fixed to a post in a big hall for everybody to see. As the society of the Late Iron Age did not have any written documents, it would have been a way to preserve spoken judgements.