The next category [D] is called wraiths. Formerly some guldgubber of this group were called dancers by Magrethe Watt, but a closer look at the details of this group makes another explanation more plausible. They have big eyes and seldom any facial distinctions. They are always naked yet nevertheless have no gender specifications. They have exaggerated hands. Attributes of the wraiths are: a staff and in the case of one imprint a necklace. Sometimes a gold collar made of a piece of gold was wrapped around the guldgubber after stamping.

There are seven divisions of the category [D]. In the first [D-I] all wraiths have their arms and legs with feet pointing downward. 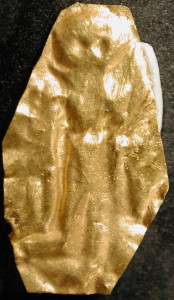 In subcategory [D-II] they touch their breast. 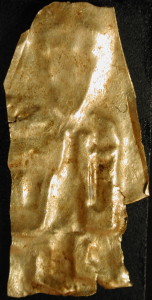 Subcategory [D-III] contains guldgubber where the anthropomorphic being is folding its arms. 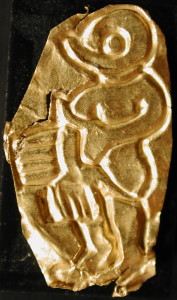 Subcategory [D-IV] shows guldgubber where the being is holding its hand up to its mouth. 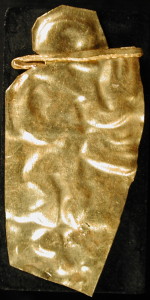 In subcategory [D-V] all of the beings shown have no or cut arms.

Cut out guldgubber of a wraith [D-V-1]

Subcategory [D-VI] consists of guldgubber where the being has raised arms. 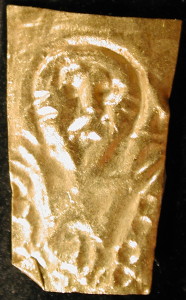 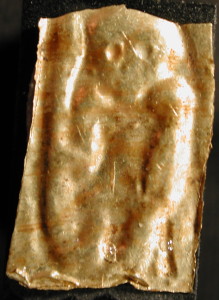 Guldgubber depicting a wraith with a staff [D-VII-1]