It is conceivable that they belonged to one of the categories above when they were made, but some of them are not readable at all.

There are four subcategories:

[F-I] the third and fourth gender 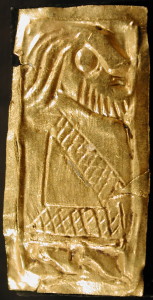 These are guldgubber, where there are conflicting data of gender. In this specific it is a dress seen in women, but the person is obviously wearing a beard, which would define the person as male. There are more than this image in this category. It is disputable, if the two sex approach in itself might be wrong, when approaching this culture. I think, that there is more to that than just the two. 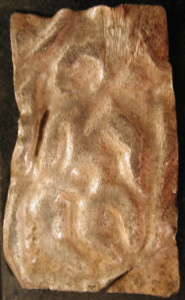 This guldgubber, and so are others, are quite readable, but it just does not make any sense what is depicted there. So for now, they are categorized as enigmatic imprint. 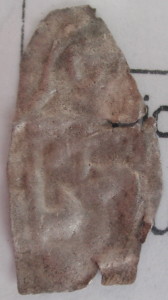 Due to age and the handling in the soil, some imprints are just not readable any longer. The might have belonged to any of the categories mentioned before, but it is not possible to really nail them down to one, so they are put here as a „safe“ option. 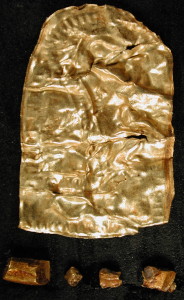 Some guldgubber were folded and some are still. Magrethe Watt heated them and unfolded them – unfortunately – and damaged the imprint totally. Due to the arc and what is left to see on that guldgubber, I would presume a drinker, but, one cannot be totally sure, so they are all put in this subcategory. 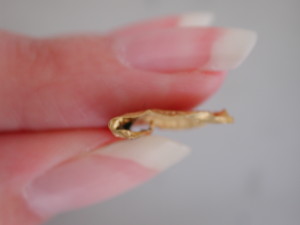 They must have been folded like that for a purpose, for what is yet to be solved.