While looking at the humanoid figures, it might be helpful to distinguishing between genders if one wants to categorize them.
To define male and female figures, one has to differ between the two sexes first.

So what is typically male and what typically female?
Typically a male person has short to shoulder length hair, normally worn open. The dress consists of a kaftan or a tunic or trousers and sometimes a cape. All of this never exeeds the length of the mid lower leg, so that the ankles and feet are always visible.

There are also attributes that only appear in combination with men, this being: staff or long sceptre, Merovingian Sturzbecher, diadem, torque, and a long paddle like undefined object. 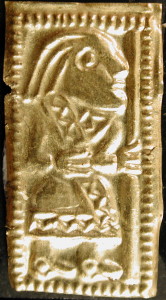 Female figures are easy to distinguish, as the female dress code did not change from the Early Iron Age to the Viking Age. Women normally wear a long dress that reaches down to the ankle or to the floor. This can be combined with a smaller dress above the underdress and a cape with various styles and lengths. The most striking detail, however, is the hairstyle, which does not change at all. All women wear a so called Irish-Ribbon-Knot which consists of a knot of the hair and is fixed with a normal hairpin.

Women have typical attributes as well. They are often depicted with a drinking vessel, which might be a horn, wear a necklace or a big and rich fibula. Very rarely an undefined object which has similarities with the upside down rune 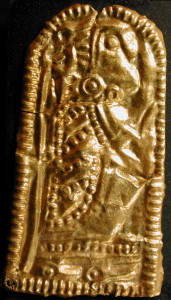 If you cannot find any of these attributes or any dress, it is hard to define the gender. On some guldgubber, you do not see any clothes, but also no hint for any gender specification. They do resemble a bit of a shadow or a ghost, that is why there where called wraiths.

If it does not look like a human or anything that could be defined as a human being even if it is far fetched, it might be an animal. There are not a lot of animal like pictures found on the guldgubber at all, but there are some, that do resemble some known animals.